[Request for comment (ROC)] Computation of the Delegation of Governance Staking

It was in August 2018 that we first shared f(x) The Road Ahead , it is the call-to-action to build something ten times better. It is with this that we set ourselves to build Function(x) a blockchain that is ten times better. After almost three years, we finally countdown to Mainnet launch. It is imperative to reiterate our vision and what it means to FX and PUNDIX token holders.

FX is the governance DAO token.

Holders are able to earn newly minted tokens from new blocks, we expect the earnings to be attractive but sustainable. It is likely on par or higher with the staking reward users are getting in the running pre governance staking. PUNDIX token holders will be able to participate via ecosystem development allocation part of new tokens especially with XPOS ported into Function X blockchain.

As per discussion of the previous article, the team has revealed and illustrated the mechanic, variables and rationale behind the block reward mechanism of the backbone of Function X network — FX Core blockchain.

We would like to discuss the key parameters of the block reward of FX Core in this article, namely:

Review of the mechanics

The formula of delegation reward can be divided into two parts:

Part one, to determine how many new tokens will be generated per block (see Formula of New Token Creation per block);

Part two, the distribution of the newly generated tokens among the contributors of the network (See Formula of delegation reward).

Part one: Formula of new token creation per block

We have introduced Dynamic inflation rate in our previous article, in which Inflation rate (per block) changes in every block according to the current staking ratio, target staked ratio and inflation change variable.

Part two: Formula of the distribution of delegation reward

To diversify, enrich and enhance the ecosystem, Function X network needs to attract and incentivise contributors, such as liquidity providers, developers, marketing, community and so on, to participate in the development of Function X network. All newly generated tokens shall be shared among all contributors, such as governance stakers (validator and delegator) and community, liquidity providers and ecosystem.

In the other words, all newly generated tokens minus community, liquidity and ecosystem pool shall equal to the portion that belongs to governance participants (validator and delegator).

Illustration of the parameters

The indicator shall come with a current (market) staked ratio. The differences between these two indicators determine to increase or decrease the degree of the inflation rate per block according to the current staked ratio.

4. Minimum and maximum of the annual inflation rate

It refers to the reserve portion belonging to other contributors, such as developers, community, liquidity providers etc. This portion of funds shall be locked in a reserve smart contract where it can only be unlocked through governance voting. The lower the number (%), the lesser the tokens will be reserved for the other contributors.

Please note that item(1) to item (6) are subject to be changed by the governance voting and will be reviewed and monitored by the community periodically.

As mentioned in the previous article, safety is our utmost concern and sadly, safety is not the only concern we are worried about. Rewards shall come with risk and responsibility and these lessons can be very expensive without guidance.

We are urging our token holders and community to participate in the current onchain staking program to get familiar with the setup, environment, costs, risks etc. The next stage would be the risk and responsibility. To smoothen the transition, the team has decided to take a step by step approach by enabling the function of delegation first and opening the validator node spots to the trusted institutions and public gradually.

Despite the fact that FX Core shall only enable the function of delegation (staking in validator node) at the very beginning, participants from the delegation shall be entitled to the block reward as well.

The team would like to propose the parameters as follows: 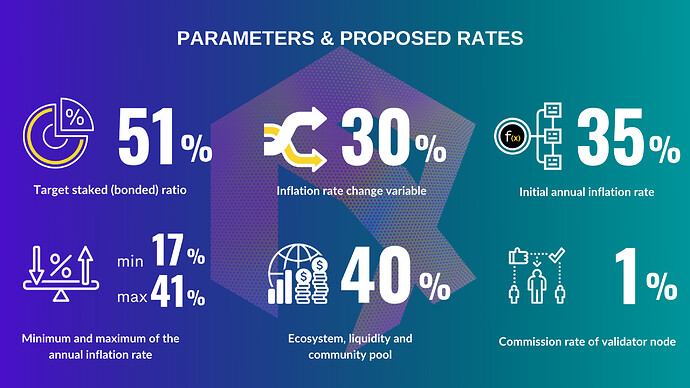 Remarks: Initially all validator nodes will be co-managed by Pundi X and Function X. The commission rate for each validator node is just to cover the minimal server and management cost.

Further illustration under the above setting:

Some examples for reference:

If we insert the above mentioned parameters to the calculator as below:

Assume block time is 7 secs, current (market) staking ratio is 33%, the annual block reward rate shall be 63% (token basis). If the staking ratio is lesser than 33%, the block reward shall be increased accordingly. For reference and benchmark, according to https://www.stakingrewards.com/cryptoassets?page=1&sort=tableReward_DESC, FX Core’s 63% annual staking reward shall rank top 10 in terms of the staking reward.

For reference purpose, under the proposed setting and the assumption of market staking ratio as 33% (which could be fluctuated), for every 100 FX staked in the governance staking the annual compounding reward could be somewhere around 63 FX.

*FX Core is using dynamic staking ratio per block, hence the variable might be different.

**The block reward is merely for reference, it might not be accurate in practice. Do your own research.

***Compounding means the delegator needs to stake their FX reward derived from their principal staking in the governance staking.

Last but not least

Nothing is guaranteed. In extreme cases, the fund and the staking reward may be reduced or lost. Please always do your own research and put in what you can afford to lose only.

Decentralised world has a pretty steep learning curve. STAKE AT YOUR OWN RISK. (SAYOR). Participate at your own risk.

As always, you can comment here or in Reddit and let us know your thoughts and feedback on the proposal we’ve made.