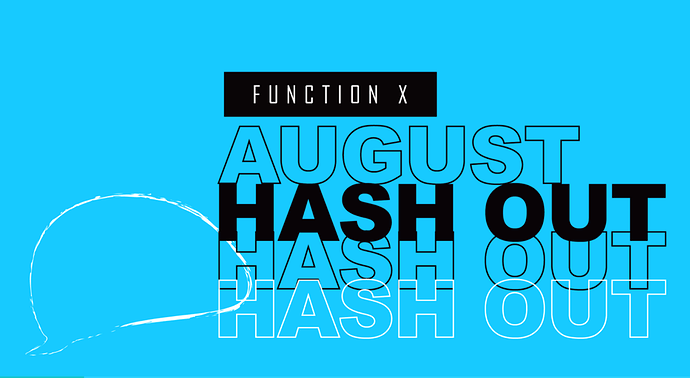 The Function X Concept Paper (i.e., our whitepaper) noted that the foundation had allocated 20% (75,720,905 $FX, currently approx. 32 million in USD value) of the initial supply as the Ecosystem Genesis Fund. Its purpose is to motivate, facilitate, cultivate and accelerate the growth of the Function X network’s ecosystem.

To keep pace with the rapid change of the market environment and to execute our commitment to decentralization in ecosystem development, finance and marketing, the Function X foundation would like to now bring the distribution and execution of the Ecosystem Genesis Fund to the decentralized governance in Function X.

Function X foundation is mindful that the learning curve of decentralization is relatively steep and participation can be expensive, so the foundation will implement it step by step.

As mentioned in the original concept paper, usage of the Ecosystem Genesis Fund (‘EGF’) will focus on the following segments: 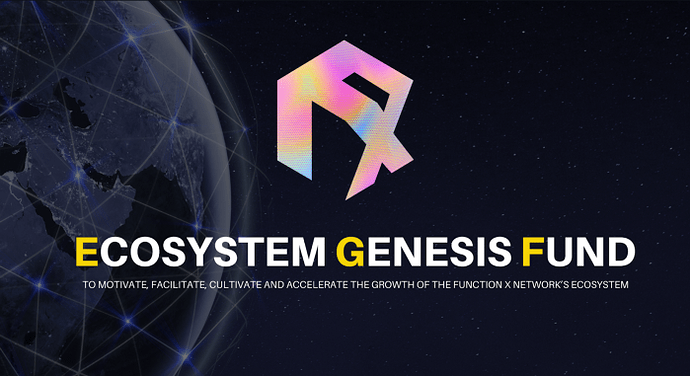 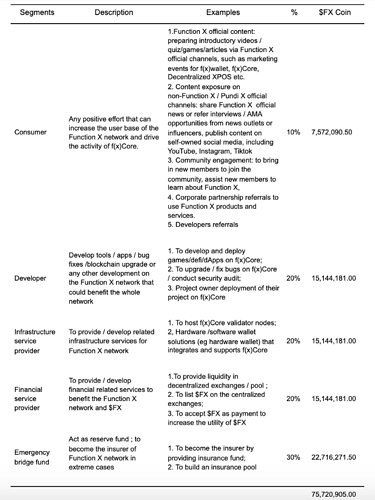 To begin implementing decentralization and its underlying ethic of fairness, interested parties should submit a project proposal publicly in the Function X Forum (http://forum.starscan.io/). The proposal should include a prototype, action plan, or an explanation of a work-in-progress together with the amount of $FX needed (“incubation fund”).

Submissions could come from individuals, organizations, project owners, exchanges or governments. Proposals could even be submitted anonymously. Once submitted (security deposit), the proposals will be assessed on-chain by the community culminating in a vote for which proposal(s) should be supported.

The project owner has the sole discretion to decide which incubator fund is most appropriate, for example, requesting funding from the developer category. It is recommended that the maximum EGF incubator fund for any proposal is 100,000 $FX, however, exceptions might be considered for particularly exceptional proposals. Project owners should consider what kind of funding is needed in light of the nature of the project. For example, the cost needed for a marketing campaign by an individual would be significantly less than the cost needed to build a decentralized exchange on the Function X network. 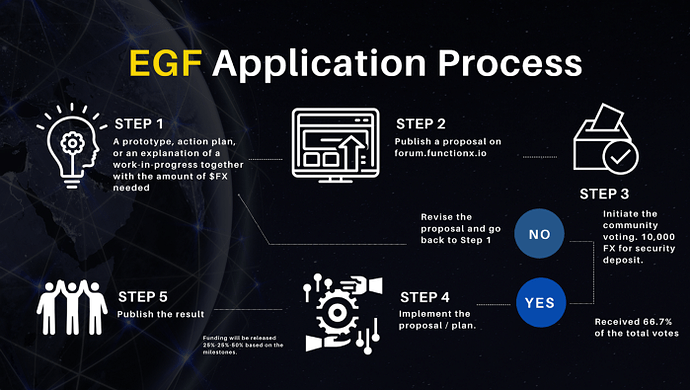 Interested parties are encouraged to join the discussion and answer questions in Function X’s forum and upload the prototype online. This could be an important factor to persuade community members to vote for the project.

Only $FX that are bonded in the f(x)Core are eligible to participate in EGF voting. 100 $FX = 1 vote. In version 1.0, valid delegators can cast their vote during the voting period by sending a random number of coins (for example, 0.1 $FX for ‘yes’; 0.2 $FX for ‘no’) to a designated wallet address. The voting bot will trace and verify the number of $FX that has been delegated / bonded in f(x)Core by the wallet address(es) that cast the valid vote.

A valid “yes” voting has to meet two criteria:

In version 1.0, the EGF voting session will be conducted on a quarter basis and the voting period will last for 14 days, validator voters can cast their vote anytime within the voting period.

A proposal should be posted on forum.starscan.io and include, but not limited to, the following content:

If you are unsure of the funds needed, we will allow you to apply for the funds multiple times to build upon the original project. This is better than applying for a fund amount that is too big. Start small.

Alice wants to build a decentralized forum on Function X (“Forum proposal”). She spent two months building a prototype. She initiated a proposal in Function X’s forum as follows:

Name of the proposal: FX Forum;

Benefit to Function X: 1) provides a fully decentralized forum for the Function X community; 2) FX Forum will allocate 10% of the DAO token to all participants during the TGE:

After 2 weeks of Q&A in the forum, Alice has received a tremendous positive response and she decides to pay the voting security deposit to join the upcoming voting session. She posts the transaction hash (please note that the incubator fund will be sent to the same wallet address) for confirmation.

Bob runs a centralized exchange. He wants to list $FX and organizes a listing marketing campaign and trading competition. He initiated a proposal in Function X’s forum as follows:

After the trading competition event.

After 3 weeks of Q&A, Bob has received a slightly negative response and he decides to retract the proposal and not proceed further.

The details of the proposals and step-by-step guide of EGF governance voting v1.0 shall be updated at a later stage. Please join the discussion in http://forum.starscan.io/.

Last but not the least, please always do your own research.

Together we can grow faster and stronger in a decentralized way.

All in all great initiative.
I am however very skeptical about reaching the 40% voted, looking back on the staking period, fx seems to have a large group of sleepers.
factoring this into the risk, I’m worried that pretty much none of the category 1 projects are worth trying at the risk of losing serious cash unless that risk is offset by asking a pretty large sum (over a 100k) thus making small initiatives/ and those trying to keep the books tight by asking for a small fund a disadvantage.

what amount of FX would now be considered active and willing to participate to vote?

Would it be an idea to have a test vote to see what percentage actually engages?

What happens with the tokens that are lost in the deposit? are they burned?

thb if the first project to take the leap fails due to a shortage of active voters, that would seriously hurt the confidence of any other proposal makers

I am in favor of a scaling initiative to kickstart the process of project creation especially with the lack of participation from the more passive holders as noted by the delay in mainnet staking + general hesitancy and non-response bias many people will have.

My proposal would be as follows.

The Thresholds could be as follows

I think, especially in the beginning, the barrier to entry should be low. We want people to build on our blockchain, so we should lower the requirements for the first half a year. Another suggestion would be the deposit should be proportional to the amount they’re asking, I think that would be fair.

Although i totaly understand the responds on the EGF, i wouldn’t change a single thing.
It’s just fine as proposed.

Precisely because of the “threshold” of 10k $fx security deposit, i think quality of proposals can be secured.
I, for one, would rather see a couple of high quality proposals then lots of “more of the same” proposals to benefit the funds.

I know, we can always vote “no” on a proposal.
But my point is, we all want a high class, rocking ecosystem, different and better then the rest.
And i truly believe the f(x)core is and will just be that.

And don’t underestimate the “sleeping” part of the community.
My guess is that there is a fairly amount amongst them waiting to get the chance to build great stuff on the core.

I completly understand your stance, and i agree with the fast majority of what is done. Its just that given the staking experiance there is a fair posibility that not a single idea can pass because not enough people vote to make the vote valid. So even thos few hq proposals would get to do their thing.
So i hope we can get something that shows that this would not be an issue.

On the other side, the 10k also makes smaller ideas too big a risk, imagine having an idea for 4k, and then losing 10k cause people did not like it enough. So it pushes most ideas well above the 10k before its intresting to consider

I belive in the defi marketing plan, and fully support having measures to prevent spamming, bad ideas and grifters, but the accebility is something that i’m still going over with a finetoothcomb

What is missing is a voting incentive to bootstrap the voting process.

Perhaps a vote lottery prize pool to start things off?

Yes, for a start, an off-chain voting incentive such as a lottery prize pool could work as a bootstrap.

There will, however. be a need to develop an on-chain voting incentive system after the bootstrap to keep the interest to vote high for the voting process, which is at the heart of the success of a decentralized decision making process, to achieve high participation rate consistently in the long term.

I think we are all on the same page.

But let’s not forget that all this is about a request for funds. A request for assets to carry out and develop ideas.

If i have a great idea and because of lack of voting power i dont qualify for EGF, thats to bad, but i can stilll work out my idea and build my great app in the f(x)Core i guess.?
I only have to raise funds (if needed) myself.

Ii mean, it shouldn’t be too easy to get free funds

I think the first round of projects should be PAID to be on our ecosystem. They are taking the risks of their time to develop here and we do not have the prestige, market saturation, market liquidity, renown, goodwill, or a slew of other concerns that can easily be solved by said project seeking development on another host who would be happy to have them Risk Free.

This is analogous to a person owning a strip mall in a brand new town that was just built asking for rent prices on par with New York City.

Developer time and head space especially in crypto is extremely competitive. We should do everything in our power to cultivate the fx “Garden” with the early seeds so that we establish great roots.

Of course we must qualify each of these new first starters, and that is what the team can personally curate for suitability.

In short. Deeper subsidies for new project creation with more risk on the Function X foundation EGF to entice devs.

That is exactly the thing, we are asked to risk our own private funds to have a chance to get some funds to make promotions for a company.

If i have a great idea and because of lack of voting power i dont qualify for EGF, thats to bad,

Absolutely, thats 10k Fx down the drain, to a lot of people that is a lot of money. its not whether its easy, it is simply an admission price that will stifle good ideas from those that have less to spend. A good portion of the community don’t have 10k fx, let alone dare to burn on a failed application cause not enough people could be bothered to show up.

I personally think the deposit should be returned if not enough voting % can be reached. that way the voting requirement can stay intact to prevent gaming the system, but eliminate the largest uncontrollable risk.
lets not forget it took months to get to the 60m in staking, now we need 77m in two weeks with less incentives.
My youtube numbers are equally depressing considering less than 1% engages, and that already took into account the 75% are bots.

I am still working on a proposal, but i simply cant risk multiple months of salary on a total gamble that based on recent experiences that are stacked against the expectations.

Yes, i agree with that.
That would be fair, would be better stimulation for many to propose.

I agree. They could introduce a penalty (e.g 10% of deposit) for unsuccessful voting to eliminate spam, but keeping all of the deposit is excessive.

Also, I believe a blanket deposit is not fair either. It needs to be a percentage of how much is someone asking for up to maximum of 10,000 FX.