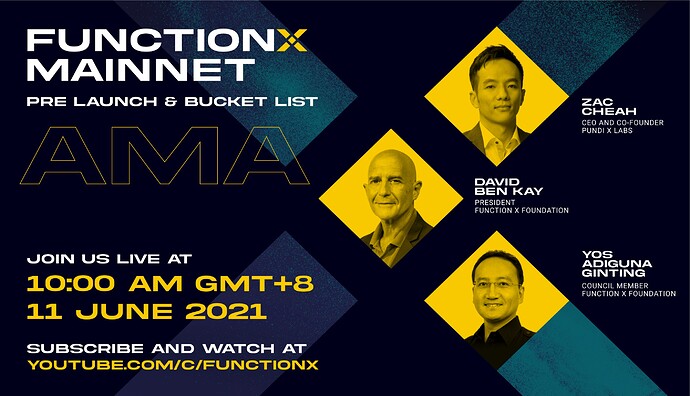 Yos Adiguna Ginting is also the Chairman Permanent Committee on International Trade of Indonesia Chamber of Commerce and Industry and holds a doctoral degree in Computational and Theoretical Chemistry.

If you miss the AMA, you can watch the video here:

The idea of Function X was introduced to the world in August 2018. After almost three years of constant building, we are now at the doorstep of launching the Function X Mainnet.

The thing we have been emphasizing is that we want the community to participate in the launch. Therefore, the FX token holders are required to stake the FX tokens to reach 20% threshold of the total current supply to unlock the FX mainnet — FX Core. 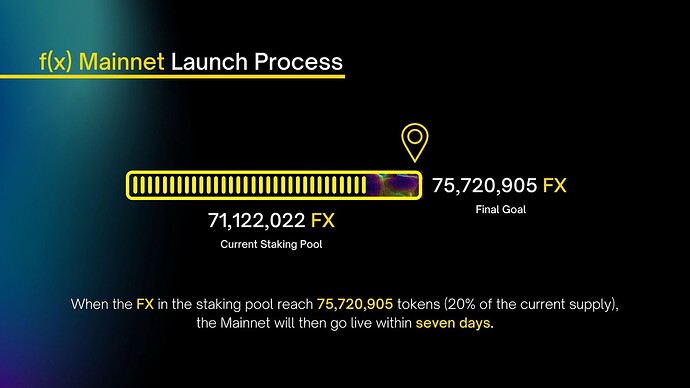 Why do we need the participation of the community and not just launch on our own?

The underlying consensus model of Function X is Proof of Stake. Which means that every block’s information has to be individually verified by two-thirds of the validators. Validators verify the authenticity by voting to approve the block. If a malicious actor takes over 33.3% of the network, there will be potential harm to the network.

What we essentially want all the community members and token holders to do is to own a part of the network so to protect the network. With at least 20% of the current token supply staked, we have quite largely secured the security of the network.

We’d encourage the FX token holders to keep staking their FX in the f(x)Wallet at least until June 21st so that the mainnet will launch successfully. 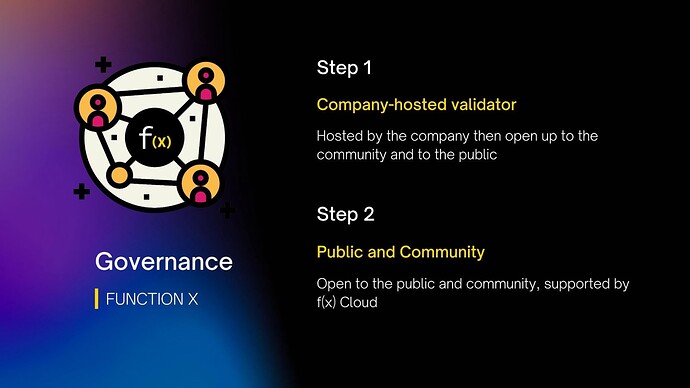 Once the mainnet launches, we’ll have 20–25 validators to validate the network. For starters, the validators will consist of company-hosted validators. These validators can start with a minimum amount of fees, which means that token holders that delegate to these validators can earn the maximum reward possible. Also, for security reasons, we’d like to secure the network together with the community so that your tokens are not at risk with the public validators.

The ultimate aim is to allow public and community participation. This was in fact done in Testnet 2.0 and 3.0 where we have shown the community how to create a validator on FX Cloud without coding knowledge required.

Yos: The Function X approach bridges between the complexities that many ordinary users are facing. The key aspect of the blockchain is decentralization, the more participation, the more secured the network will become. The problem is, even the simplest blockchain wallet is quite difficult for average users, especially for those who have no experience in blockchain. The approach of Function X is to allow users not only to stake but also be able to participate in running a node with a few taps. This is quite different from other blockchains in which substantial knowledge is required to run a node.

David: The user interface of Function X makes it so easy to use for users. There is a learning curve in it, and I think we’ve approached it on a step-by-step basis and made it a fun as well as educational experience for those who participate.

Not only to create nodes on the Function X network, our objective is to allow people to create custom chains without coding. So, corporations, banks can launch their chains using Function X technology. All these custom chains are interconnected to our mainnet, FX Core.

We are making validator creation as well as custom chain creation codeless.

Once the mainnet launches, all the transactions will be recorded on the Function X Explorer. 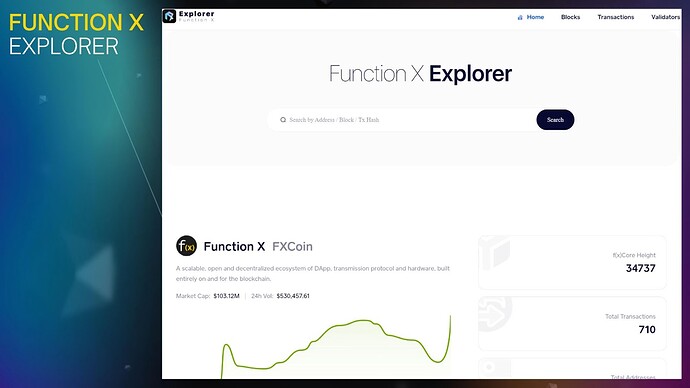 Another thing you will see is the new version of f(x)Wallet.

We’d like to leverage the existing infrastructure on Ethereum and at the same time provide an environment with higher speed and cheaper fees on FX Core. Your FX tokens will be transferable in and out between FX Core and Ethereum.

This will not affect the token supply and can be done easily via f(x)Wallet and our website.

Also, our CryptoBank feature (in f(x)Wallet) is a simple way for users to stake and earn in a decentralized manner with attractive APY.

In short, f(x)Wallet will be updated when we launch the mainnet. FX token holders will be allowed to bridge to FX Core from the Ethereum network and delegate into the validators. A list of validators will be shown in f(x)Wallet for users to choose to delegate your tokens. 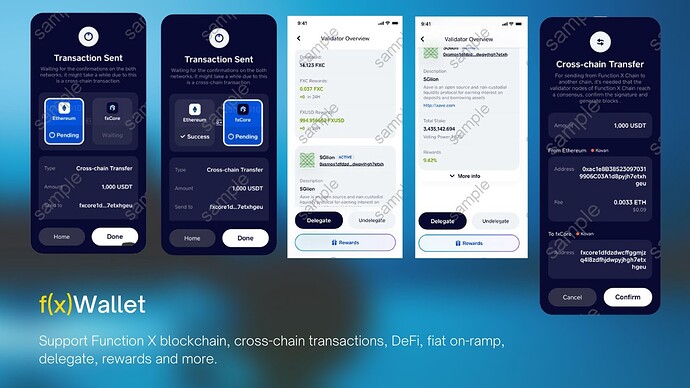 When you delegate your tokens to a validator, what are the earnings you will get?

In the past 2 months, we have proven that without active participation of the Foundation, we can rally the community to stake 20% of the total supply, and we believe it’s possible to reach the target staked ratio. 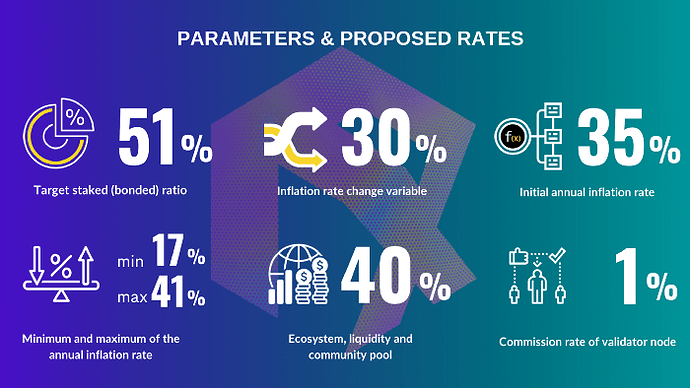 If you delegate your tokens to help secure the network, you are entitled to receiving a portion of the initial rate of 35%. However, since not everyone is securing the network, assuming only 50% of the participants, the initial 35% is distributed to half of the people. That means, the tokens you will get are more than 35%.

Of course, in that 35%, 40% of which is allocated for ecosystem, liquidity and community pool.

We strongly advise that you read the Function X: April Hash Out and use our calculator to see what you’ll get because the number is always changing according to the number of people staking, the commission rate of the validator (which is 1% now). 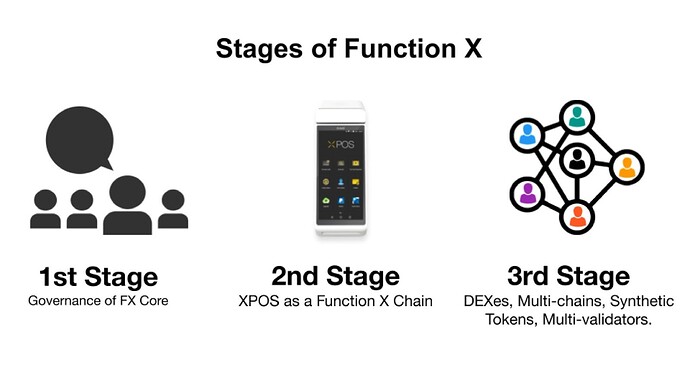 The first stage is the mainnet launch. Everything you expect with the network will be fully launched with low fees, high speed transactions and strong participation from the community.

The second stage is to make XPOS and our other financial transactions on Function X. The focus of the second stage is to create a custom chain for XPOS. The project name is temporarily called the XPOS-chain; it will be connected to FX Core. The ideal situation is, for example, a financial institution that has built a custom chain on Function X can hop to XPOS chain through FX Core. This is very exciting as we plan to use the XPOS chain to power a lot of financial tools and services on the Function X network.

Pundi X token holders can also bridge in and out Etheruem and Function X network.

The use cases for Function X 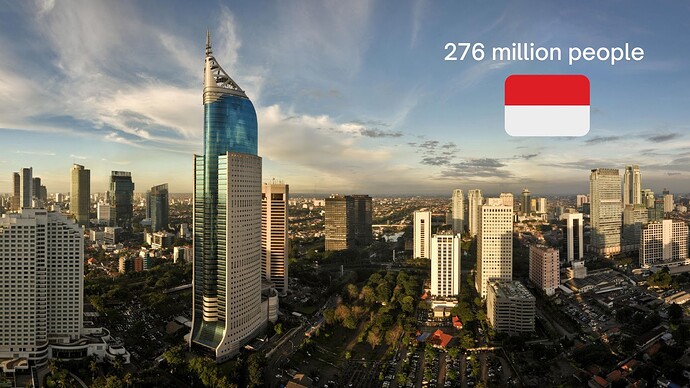 According to the Indonesian Minister of Trade, Muhammad Lutfi, the Food & Beverage market amounted to 3,669 trillion Rp. (approximately 257 billion USD) is served by a new digital economy of only 18 trillion Rp., which is merely 0.5%. The current total registered small and medium enterprises in Indonesia is no less than 13 million, so the potential is huge.

Blockchain technology has received high attention in the country. Pundi X and Function X with the said technology and working products are suitable and potentially able to support Indonesia achieving their goal.

Read more: Indonesia’s Digital Economy Has the Potential to Grow Up to Eight Times in 2030

On a side note, the XPOS is now deployed in over 30 countries and our team is talking to the high officials in El Salvador to seek for potential collaborations.

Since Function X is a network that allows custom chains to be created on the fly and connect to FX Core, in the third stage of Function X, though will not happen very soon, we have chosen to divide into the synthetic and derivative assets market. 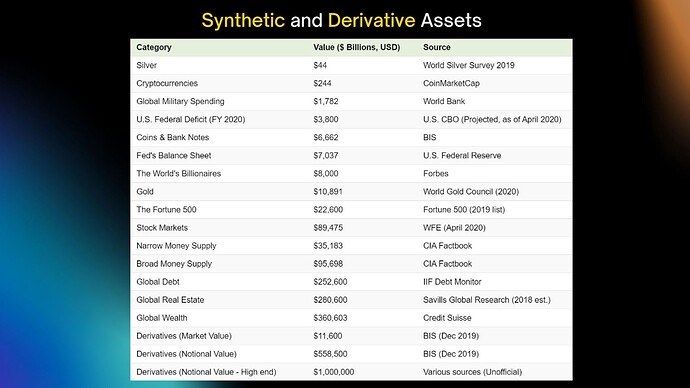 Which means, tokens from different chains can move into Function X and be able to create synthetic and derivative assets in the network and trade on the network. We will be able to fetch the price from on-chain oracles to allow the tradings to be on-chain and fully transparent.

This is in the planning stage. Our goal now is to launch stage one and move forward.

Our community members have been asking where they can post the questions. Here it is, the Function X Forum, where our community members can discuss more serious topics and share creative ideas. The recent reward token idea is in fact brought to us by the community in the forum.

We welcome anyone who is interested in discussing Function X to join us in http://forum.starscan.io/ 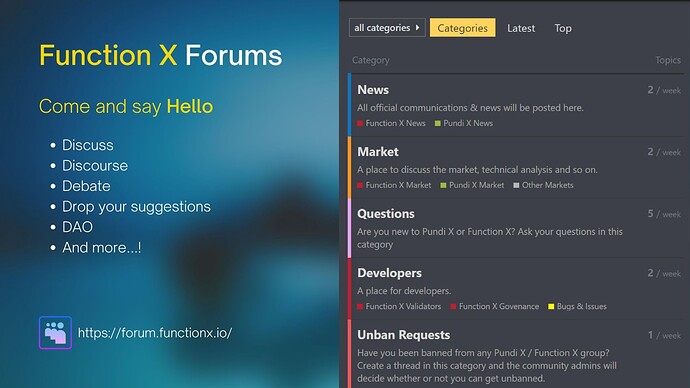 Pundi X Chain on Function X and the reward tokens

The reward token mechanism allows users to participate in NFT auctions, airdrop etc. It is also deflationary, which means every transaction you make to another wallet (not white-listed) will decrease 20%. The purpose of this is that we’d like you to keep it, not to trade it, as it is for the purpose of rewards.

NPXSXEM, which was initially built for NEM and later moved to BEP2, will be merged to the reward token system and be available on Function X and BSC as a BEP20 token.

The PUNDIX holders will be able to stake and get a good amount of reward from the token firstly on BSC and later on PUNDIX Chain. There will be no allocation to the Pundi X team. All the rewards will be for PUNDIX token holders and NPXSXEM token holders. 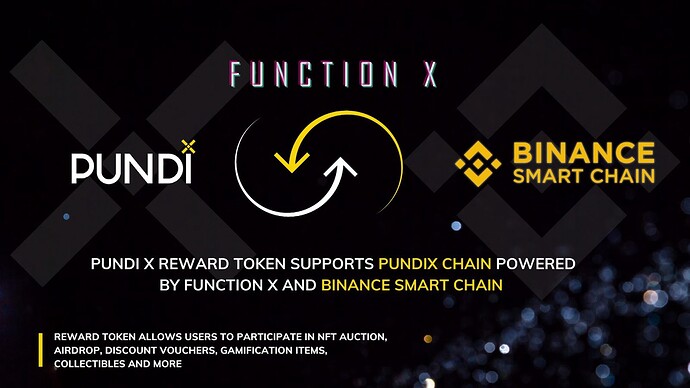 Function X will play the role of the enabler. There will be a custom chain for PUNDIX on Function X network where the PUNDIX token holders will continuously be rewarded.

From Testnet 1.0 to now nearly launching the mainnet, we’d like to thank the community for your continued support and we are more than excited to see Function X come to life.

The mainnet will launch any day soon. Let’s look forward to that together.