This series will be divided into two parts for better understanding of the decentralized staking. The first part is to understand the staking through decentralized protocols, the terminologies, type of staking and overview of the staking process that Function X provides.

Decentralized finance is currently an experimental form of finance to offer traditional financial instruments that does not rely on central financial intermediaries such as brokerages, exchanges, or banks, and instead utilizes smart contracts on blockchains, the most common being Ethereum (Wikipedia). From the perspective of finance, funds need to travel and be utilized to create value. Centralized organizations are able to do this through the shared clearing system that was built decades ago by central banks.

However, in decentralized finance, the basic flow of funds remains the same except the connecting point shifts from a centralized server to a blockchain. The obvious reasons are fund transparency, fund safety and others. However, the “secret sauce” is to enable the fund to be ‘communicable’ and ‘interactable’ with other smart contracts.

Where does all this return come from?

High risk should come with high return. The greater the risk, the higher the reward. In the worst case scenario, participants might lose everything. The frequently mentioned risks are:

Due to the complexity, rapid changes and sophisticated processes of smart contracts, nothing is guaranteed, not even a security audit firm can ensure with absolute certainty the security of each protocol and smart contract. It is a high risk activity, so if you want to participate in DEFI Do your own research (DYOR) and only put in what you can afford to lose.

Simple notes before you participate:

A journey through staking on a decentralized protocol

With new business models and new technical innovations having been introduced recently, more staking and post-staking events and activities will be implemented in the near future. For those who have not joined the crowd, we would like to take this opportunity to guide our community to embrace this trend alongside with the mainnet launch of Function X. New things to be learned and new habits to be cultivated.

The Team will divide this guided journey into 3 phases with significant incentives at each phase:

As a first step, this article will introduce “staking” on a decentralized platform. Staking refers to users actively ‘locking up’ their tokens on a specific platform for a certain period or time and with the consensus that the owner of that specific platform will use the tokens for specific purposes. Normally, we can simplify the staking into dual-token staking and single token staking (single-sided staking).

Why do we have post-staking?

Rather than doing nothing after the staking, there are several protocols that provide post-staking activities. For example, in a lending platform, users can choose to re-stake their LP tokens to another smart contract to earn interest; in a synthetic platform, users can further trade the asset available on the platform, such as BTC, ETH, for the synthetic asset that’s synthesized by the previously staked asset.

We believe practice is the best way to learn and become familiar with new things. We would like to draw your attention to [Hash Out March (part 2) A guide to participate in Function X staking]. In the second part of the March Hash Out, we will share more information about the mechanism to stake PUNDIX and FX token through a decentralized way.

Last but not least, as with all things crypto, Do Your Own Research (DYOR) and remember, nothing is guaranteed. And please, only risk what you can afford to lose!

Here is how the staking reward calculates.

IF Alice staked for 24 hours (without withdrawal), she will receive a staking reward as follows: (total staking daily reward: 150,000FX) 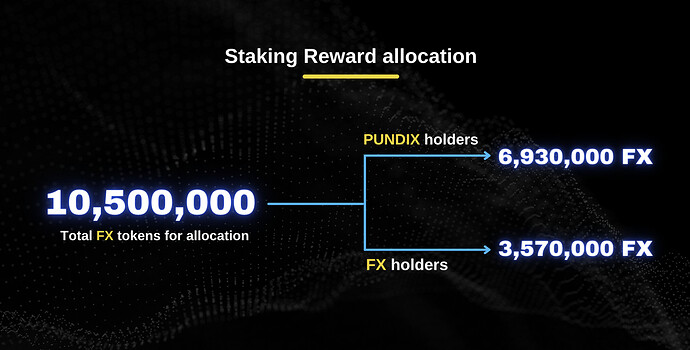 There is no cap on each wallet address that can be staked.

Withdrawal of the token will result in no entitlement of staking reward during the staking calculation period.

To avoid market fluctuation and maintain the viability of the network, it is a common practice for staking smart contract implementing token lockup mechanism for the distribution of staking reward. Each cycle reward starts with releasing 5% of the claiming staking reward immediately and the remaining 95% of the staking reward will be locked for 19 weeks. In short, each ‘cycle’ consists of two parts: immediate release (5%) and locked token (95%). Locked token will take 19 weeks (5%/week) to be fully unlocked.

Users can claim the staking reward anytime they want but the unlocked token can only be released every 7 days.

Note: The smart contract will compute the staking reward in terms of block time instead of day/week. Day/week in the calculation is for illustration purposes.

Basic rule of staking reward: NO CLAIM, NO TOKEN.

The smart contract will compute the total token receivable for each wallet address but it requires users press the ‘claim’ (send request) button actively to claim it. Regardless of the staking reward or the unlocked token, the reward token will NOT transfer to your wallet automatically.

The unlocked token derived from each staking circle will be accumulated automatically without user’s interference, users can then choose anytime before the deadline to claim the unlocked token.

For example: (a single circle)

On 1st June, Alice’s f(x)Wallet interface showed a total staking reward of 1,000 FX to be claimed. She ‘presses’ the claim button and pays the gas fees to claim that 1,000 FX reward. After the smart contract processed the transaction, 1,000 FX will be transferred out from the receivable account to the following account:

Please note that, the first claim of the staking reward is the prerequisite criteria of the following unlocked token.

The balance of different staking rewards from each staking cycle will be combined and shown on the staking interface.

Users can claim the staking reward anytime they want but the unlocked token can only be released every 7 days.

Network and the gas fee

The purpose of staking activities is to help our community to become familiar with the whole decentralised network and environment, hence the whole staking smart contract and token (ERC20) will be running on the most popular network — Ethereum network.

Basically every transaction needs ETH as a gas fee to perform the request, in layman’s terms, every action/request in a decentralised network costs money.

Sometimes, due to the network congestion, the requests or transactions might not be able to respond promptly.

Please check the gas fee (cost of transaction) before performing the transaction/request. Your patience is required so that you can avoid duplicating the transaction or requests as this might result in further network congestion and spending more gas.

The FX token you will receive from the staking can be used for the transactions on the Function X blockchain when the mainnet is live.

Withdrawal of the principal

There is no restriction of the withdrawal of the principal from the staking pool.

Users can request the transfer (gas fee involved) of the token (PUNDIX / FX) out of the staking pool anytime. By doing that, the wallet address will not be eligible for the future staking reward.

However, the withdrawal of the principal shall not affect the previous entitlement and previous locked token distribution.

For example, on 15th June, Alice decides to withdraw her PUNDIX from the staking pool and by the time she transferred, she was entitled to an unclaimed staking reward of 10 FX which she has not claimed (or start the circle) and 20 FX token in the locked token account. The withdrawal of her PUNDIX token shall not affect her previous staking reward. She just needs to claim her 10 FX and wait for 19 weeks to unlock and wait for x weeks for her 20 FX to be unlocked.

How to begin the journey

Last but not least, although the team will try their best to provide a secure and stable environment; however, nothing is guaranteed, neither the fund nor the reward is 100% safe in the extreme scenario. Please do your own research and put in what you can afford to lose only.

Patience, risks, and rewards are always part of the DeFi’s journey.