My Daily rewards tokens I am actually receiving dont match the estimated tokens per day?

Is there an FX wallet tech support email address I can use for more Support?

Your request (1433) has been received if any support member wants to help me out.

The actual rewards are not compounded, so it is slightly lower - APR.

It gives a breakdown of Daily estimated rewards. Mine is off 1.7 fx per Hour over a 24-hour period…

Yes, because the estimated daily rewards are calculated as APY - compounded value over a period of 365 days.

But the rewards do not auto-compound, so what you are receiving is actually based on APR and not APY.

But in reality, it is APR because there isn’t any auto-compound feature.

Difference of 0.84 per day for every 10,000 FX delegated.
This is why you see your rewards not matching what is stated on the wallet.

Wallet shows APY but it should be APR.

To avoid this situation and not confuse users, I actually already suggested to the team last year to change it from APY to APR so that it would show the actual daily value instead of a compounded value.

You can see from the picture above, I already expected users to ask this question before it even happened.

Base the daily estimated reward on APR and this will correct everything going forward.

Hope that clear things up!

What you are getting is actually based on APR.
The value stated on the wallet is based on APY.

TY, for helping me out! But that means their daily estimate is off by 42.2975899 FX per day, that fake number they made up adds up fast over a week. I am a number guy and that is just RIPOFF, not a mistake! That sounds like another class action wet dream lawsuit for some attorney. Instead of PUNDI making all this new useless NEW crap. They need to fix, check and recheck what they have and are advertising. Just for your Info, my Andriod phone wallet shows the top interest rate as 27.17 % (which doesn’t exist ), but my Ipad shows it as the real top rate of 24…04 %

It is not a fake number, Jay.

It just calculates based on APY, not APR.
You can either see it as compounded or non compounded, it is purely up to the user.

A lot of protocols show the reward value as APY even though their vault doesn’t have any auto-compounding feature. It is very common.

But I would suggest for the estimated reward to be based on APR so that we can avoid these type of questions for users who are into numbers like you and me.

The team is doing their best behind the scenes and f(x)Wallet 2.0 will be coming out soon!

i do calculation rewards/days and not same

What you are getting is actually based on APR.
The value stated on the wallet is based on APY.

It’s different because the estimated daily reward is based on APY which is the compounded value.

Once the team change to APR, it will show the actual non-compounded value which will match.

It puzzles me that the application indicates how many fx it is estimated that I am paid per day and that when, for example, 10 days have passed, multiplying what was indicated was estimated does not correspond.

I think that indicator should be exact. to me from the beginning the memory has always been 20%

Pundi Support is Ignoring my request for an answer as always. Please flood their support with this same inquiry so they will do something about it!

If you manually compound your rewards over a period of 365 days, it will match today’s stated value.

To give you a peace of mind, I’ve informed the team regarding the change of APY->APR so the values will match the stated value.

TY again for the Info.
But They made the app and as you can clearly see, it CLEARLY says 24.04 APY, and MY payout should be 235.25759 fx per day. I didn’t make up the numbers or DO the math wrong PUNDI has it posted for us. You had already brought the calculation error up to The team before, and they ignore it. They are only Interested in more people buying this THINKING they are going to get a Higher interest rate.

A good Class action attorney will sue them and Every validator on the app. It’s not the Validator’s fault but that’s what attorneys do. All Prices for Pundi X and FX will tank and THE BUYERS are the real ones that lose!!! 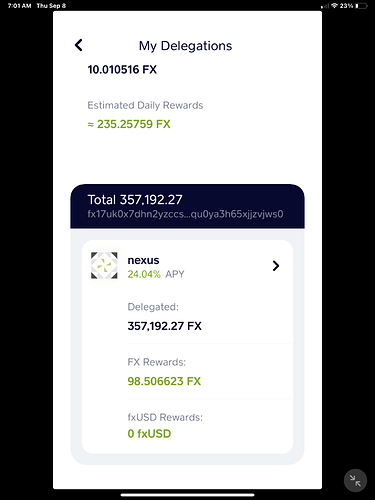 Hi Jay, the team is actually working very hard on a lot of dApps and collabs behind the scenes.

They are devoting their time and resources to developing a collection of dApps and potential collaborations that will increase Function X’s user base and activity.

Do give them some time!

on the FX Rewards i earning less than the estimated digital number of daily rewards.

I have contacted FX support on Facebook also with this same complaint. This all started because no one is answering my email on so-called Tech support inside the wallet. Then I find out You already warned them & they know about this issue and choose to ignore it. I invest and reinvest in FX for the interest rate Promised. The wallet gives me a daily total and percentage rate. Not paying EVERYONE the rewards that are advertised are supposed to be okay/ NO big deal / just a glitch is what you keep Publically saying.

But All I hear is it’s OKAY to falsely advertise APY instead of APR Because it’s NO big deal to YOU.It’s only us ALL the Investors not getting paid correct?

You are getting paid correctly based on APR. That’s what I’m saying.

The estimated daily value stated at the front-end is just calculated as APY instead of APR.

After it changes to APR, you will still be paid the same as you are now.

Everyone is being paid at the APR rate; it is just the front-end calculation that shows it as APY and the team is now aware of this issue and will most likely be changing to APR in the upcoming updates.

To give you a peace of mind, I’ve informed the team again regarding the change of APY->APR so the displayed value will match with what we are all getting - which is originally based on APR.

then Devs need be update or change that on “FX Rewars” on F(x) Wallet??

Yes, they are aware of this issue already. Kindly wait for the upcoming updates.