As mentioned in the previous RFC article, Pundi X rewards is being reviewed to facilitate, enhance and accelerate the growth of the Pundi X network and to function as the block reward token of the upcoming Pundi X Chain powered by Function X. We believe this will tremendously benefit $PUNDIX and $NPXSXEM token holders.

Pundi X Chain is a dedicated payment-focused blockchain in the Function X network. It is specially designed to perform high throughput transactions with low latency and low transaction fees. In addition, it provides room for future compliance requirement upgrades, hardware (XPOS) integration and Point-of-Sales compatibility, with a tokenonomy offering incentives to merchants and payment processors. 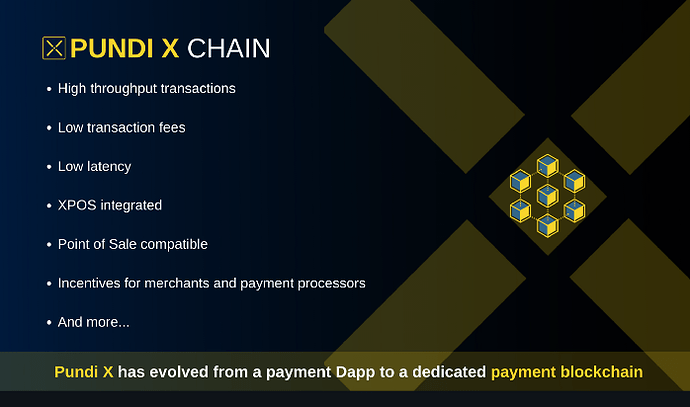 Due to the rapid change of market conditions, recent technological advancements and the development of Function X, the team has been looking for a solution to bring crypto payments to the next level. After numerous trials and significant effort, Pundi X can now embrace the decentralized network by running payment services on its own blockchain to further promote the vision of making ‘buying/selling/spending crypto as easy as buying a bottle of water’ in a decentralized network.

It is an upgrade and further actualization of our vision.

Pundi X has evolved from a payment Dapp to a dedicated payment blockchain.

The multi-chain structure of the Function X network enables others to set up and customize their own blockchain network on FX Core. To provide a simple analogy, Function X network is like a piece of land that is fully equipped with foundation, concrete and pillars in the form of (f(x) Cloud, f(x)Wallet, etc. Developers or projects can build their highway effortlessly on the existing foundation of Function X’s land. The initial purpose, languages and currency charges of each highway might vary, one from another, so we need a coordinator and connecting point to be able to communicate. FX Core is the main interchange bridge that connects to all the different highways. 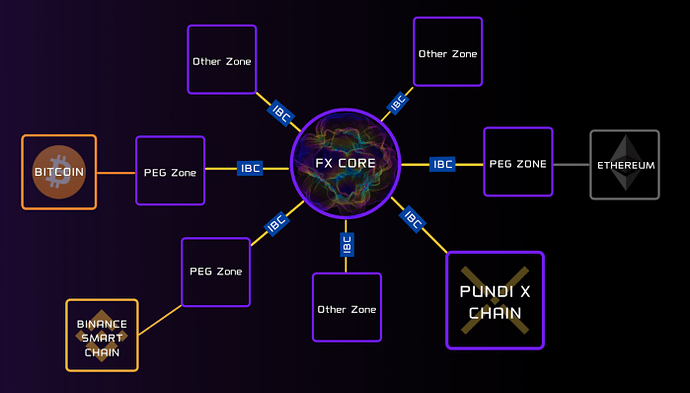 Pundi X Chain is one of the many highways / branches that are built on the land (Function X). It is connected to FX Core to be able to communicate with external networks (such as Ethereum and Binance Smart Chain) and internal blockchains.

Pundi X chain inherited the infrastructure setting and consensus model of the Function X network. Similar to Function X , Users can delegate their $PUNDIX token into the validator node to participate in block validation and in return delegators and validators will receive block rewards for their contribution and effort.

Block rewards tokens are created every block and distributed among validators, delegators, the liquidity pool, developer pool, community pool and other contributors participating in the consensus process and ecosystem enhancement. This provides an incentive to $PUNDIX holders to not just passively hold their tokens in wallets, but to put them to use in order to secure the network, liquidity enhancement and enrich the ecosystem.

Instead of a fixed rate, the number of new block rewards tokens created per block varies and depends on the percentage of the total token supply that is staked in the network.

The main structure of PUNDIX Chain is derived from FX Core, hence the underlying block reward calculation is similar to what’s been created for FX Core.

The calculation of the new block rewards tokens can be divided into 2 parts:

Users can refer to the calculator below:

$PUNDIX token is a deflationary token. It is fully unlocked and reached the maximum token supply in 2019. According to the whitepaper, NO new $PUNDIX token can/will be created to dilute the interest of current token holders.

Therefore, to further stimulate the growth of the network, incentivize stakeholders and encourage use of the upcoming Pundi X Chain without jeopardizing the interest of $PUNDIX, we are proposing to introduce a new Pundi X Rewards token (provisionally called ‘$PR’) to facilitate the growth. 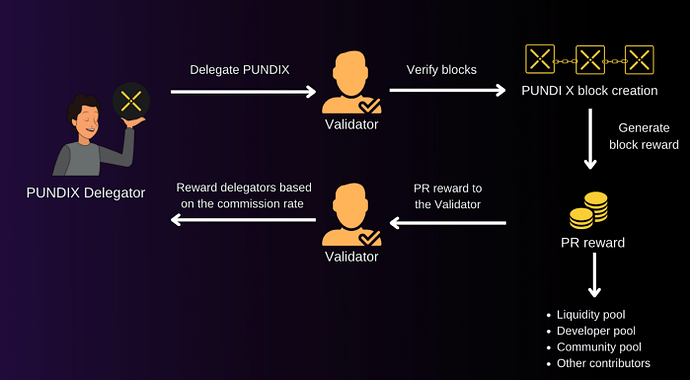 The initial supply is 64 billion $PR tokens. There is no maximum supply. The initial supply will be distributed to $PUNDIX holders and through a 1:1 conversion for $NPXSXEM holders. The $PR token is not meant for speculation but acts as a loyalty token, therefore a token lockup mechanism and BDL (burn, distribute and liquidity) mechanism are imposed.

There is one important concept before we dive in:

Delegating $PUNDIX to get $PR in Pundi X Chain

Considering that the token supply of $PUNDIX is 258,491,637 and the initial supply of $PR is 64 billion, the team is proposing the following: 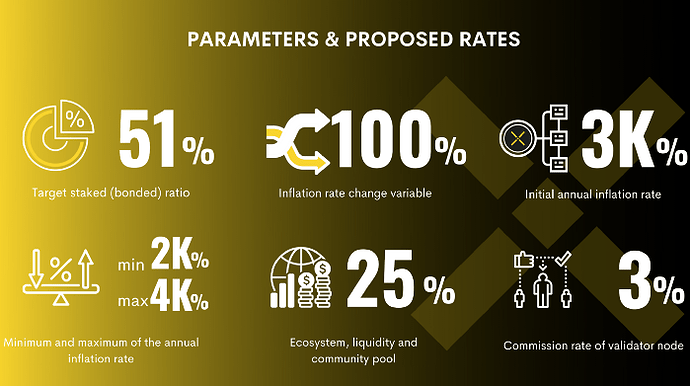 According to the proposed parameters, if the market staking ratio is 20%, the block reward is estimated to be 89,691 $PR tokens for every 10,000 $PUNDIX tokens delegated for 30 days. (for reference only)

All parameters are adjustable through $PUNDIX governance on-chain voting.

For $PUNDIX holders — holding in private wallet to claim

We will take daily snapshots of the average $PUNDIX held in individuals’ ERC-20 wallets during the calculation period.

Average daily holding of $PUNDIX during the calculation period per wallet address * total claimable $PR tokens during the period.

The claiming schedule is set out below:

$PR token will be running on Binance Smart Chain (BEP20) , hence users have to claim it manually. No claim, no token. All unclaimed $PR tokens will be forfeited.

For $NPXSXEM holders — conversion and migration

There is a 90-day migration window. The migration ratio is 1:1. Users have to send their $NPXSXEM to a designated smart contract to convert to $PR tokens. There is a 12-month lockup period for the initial distribution of the $PR tokens. $NPXSXEM migration users will get 12% of the total claimable tokens right after the migration, and the remaining 88% will be unlocked (8% every 30 days) over the next 11 months.

Please join the discussion and share your thoughts with us at http://forum.starscan.io/ and https://www.reddit.com/r/PundiX/

Lastly, please always do your own research (DYOR). Rewards are not possible with risks. The crypto space is full of uncertainty. No one can guarantee your success.

Did I understand correctly that snapshots of addresses have been going on since July 21, 2021, in wallets from PundixLab, such as XWallet and FunctionX? 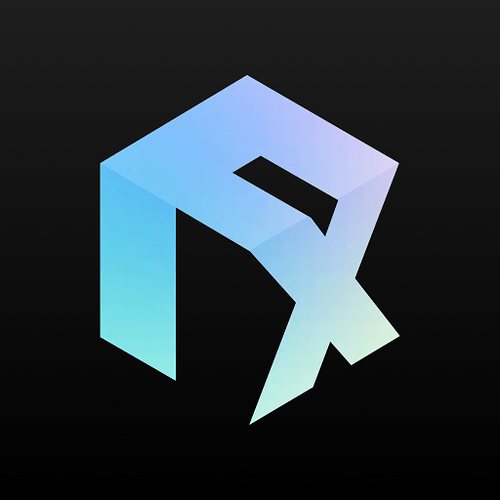 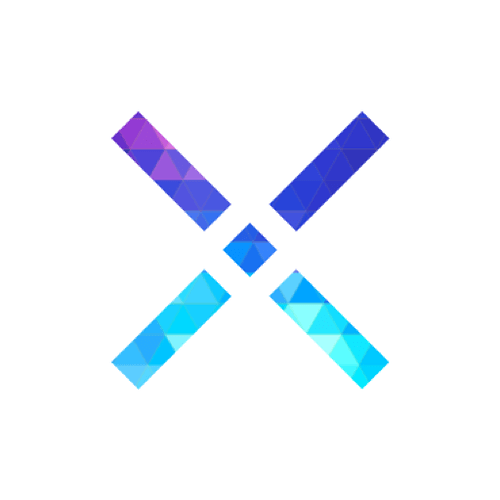 Only private decentralized wallets i think, X Wallet is centralized.

Yes? I lost two weeks of screening!
I am urgently transferring funds to FxWallet!

Remember to write down your key seed phrase on paper!

Just wanna share this cool storage option for a seed phrase. I’m not saying paper is not a good option, by all means, it’s better than nothing, but a steel plate engraved manually with the seed phrase can last a lifetime. 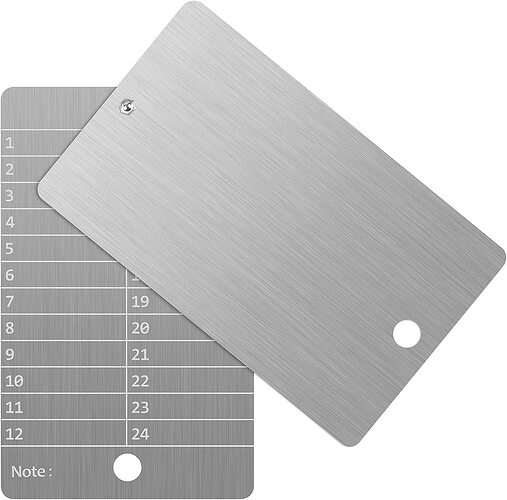 Cool gadget. I want one.
Thanks for the tip.

I keep thinking whether i should learn to memorize the seed phrase, repeating it and chanting in my head incase the house burn down or something and it is lost hahah

I keep thinking whether i should learn to memorize the seed phrase, repeating it and chanting in my head incase the house burn down or something and it is lost hahah

Probably you are right

I would like to see a tutorial on how to claim your $PR Tokens on BSC. For example Metamask Wallet. Because F(x) Wallet isn’t live with BEP-20 like Metamask. That’s how I use BSC and I’m sure some others are like that… #PundiX #FunctionX #MassAdoption #XPOS