It looks like the current sentiment is divided in 2 camps bc of the price much more down since the swap and BTC downtrend:

The more bigger camp A is the positive hodlers seeing value in the fundamentals, looking long term, contributing to the community and believe both projects will do very great in the future and will show in the price too.

Camp B are the ones that sold at a loss or still hodling but selling at the price they bought their bag. The average person in this camp is on a warpath spreading FUD/scam posts at social media and are dedicated to it. So far i see is at Twitter the worst but i don’t know how it is at Telegram and FB.

I’m obviously in camp A and would like to see a happy, fully connected and helpfull community where we can also help new investors with questions and show them the light in both projects. Ofc in every project you have negative ppl but currently we have lots of them and i think it have a negative impact.

Maybe we should do something about it. The team could at platforms like Twitter block the hardcore FUD ppl if that’s possible and us (camp A investors) could confronting them and spreading positive vibes around.

A fully connected community would have a lot more chance to grow and for long term very good as new investors will be more likely to come.

Blocking will prevent them from seeing and commenting and we the believers will flood the comments with positive vibes to attract newer potential investors.

We need to show a greener light for more people to hop on-board. Same goes for all Pundi X and Function X twitter accounts.

Block all the fudders to prevent bad comments. People usually click and read what other people are typing so blocking helps.

I have a telegram group, specifically created for this purpose of education and understanding the bigger ecosystem of pundix. So far I have 12 members.

Also I’ve made some suggestions to Zac (See group Zac) in short, AMA, block em, and we move forward with only a handful of the persistent fudders left behind.

For transparency I have not block anyone on Twitter for some time. I reckon from you guys that you are suggesting it’s time?

Please. it is causing potential investors to turn away.

I believe it’s time. There’s too much FUD scaring potential new investors away

Ooooh please do us all a BIG favor. And block them. Tired of going against the stream.
I have discussed with some of them their mistakes or tried to change their sentiment… A few changed their views a bit… But a lot are just Fuddling on every post of Zac or pundilabs or any other Pundi twitter channel…

I block every time FUD and Scam people on Twitter

Why should i bother with negative energy

Renamed topic from “The Current Sentiment” to “Sentiment: proposal to block fudders on Twitter”.

Yes, i block all stupid comments in both pages.
I can accept a constructive critic, but not stupidity

at minimum some kind of universal response directing them to web / info pages and some sort of confidence pitch with a warning keep it civil and real or the project will have to block them out, I found it easier to respond and block or you’ll be in a 20 message debate, yes please block for your supporters sanity, I have been battling it from day one and personally it’s taken a toll , I am one of the hardest to turn and this has nearly made me decide to delete all social media but It’s the project i don’t want to be disconnected too, everyone if you all block all fudders you see as well there is less these people will see and be able to fud on, these people are not worth the time especially when I think most are deliberate project sabotages and never cared for Pundi ever,

What you also can do is block on your own account the possibility of replying. People can still retweet and like but can’t make any remarks.

yeah like cz_binance is doing it too… only people that you are following with our account can reply… this would be the best option i think.

Yup. From what i see, majority of the other projects also do the same. They block all the people spreading negativity, pretty common nowadays.

I starting to doubt if it is usefull to reply to ppl spreading FUD/scam messages. I fear that they keep spreading it till the price is at pre-swap height. Ofc after that there still be negative ppl but then the persons bought at or near ATH will have their money that they invested and leave the projects alone. Ofc we will still keep the persons sold at a huge loss. In theory far less of negative ppl when they selling at their buy price.

I know what i reply on Twitter to negative persons is pretty unoriginal but so are their messages. I just want to help the community but if it’s counteractive then i just ignore them and let it flow like water in a river. Usually at the end of a river the water comes in a sea and i see the same happening with the whole community. Later a very positive and already growing overall community.

I do want to say here in FX forum & Reddit are truelly great communities with much nice and helpfull ppl. Btw how is the sentiment in the other platforms? I don’t know that😅

Edit: i will keep replying them and would like to ask everyone in the community to do the same. Thank you all for reading🙂

@zaccheah at last one is gong but please block them from all pundi Twitter accounts… he and others are still fudding at the other accounts. 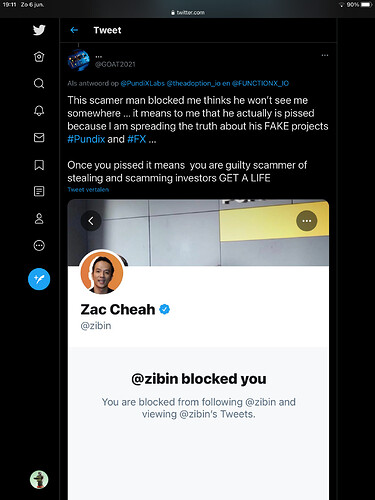 Hi,
I am new to this forum and also probably newer than most of you to the project, as I started investing in Pundix in March only, and then in Fx too. I find the projects extremely interesting and promising.
Actually I think that constructive criticism is not a bad thing at all, however I have seen next to none on Twitter. Just negative and rude comments which I find absolutely not acceptable.
I understand you doubt if it is useful to reply to those comments. By replying to them you will probably not change their minds, at least from most of them, as they have not the slightest idea about the project and the potential behind it, and/or they are only very short term minded. However, I think it is good to reply to them to not let them fud and shy away other interested people and potential investors who are reading these comments. I know it is a time and nerve consuming exercise, but I will do this as well.
Best regards to all,
Christoph

I saw Goat’s comment too on Twitter and shows how really pissed he is that he is blocked by Zac. Ppl like him deeply hate the projects and won’t ever change. There is only one goal in their mind and that is to destroy the reputation of the projects and repelling all potential new investors.

The reason? Probably bought at a high price and excepted very short term to rise but instead it was going down, sold at a huge loss and blame the projects for it instead of looking to theirselfs. Or believing it’s a scam bc others said so.

Even i had spoken one guy claiming to be holder since 2018 and have a amount of 6 digits PundiX and currently believing it’s a scam. If you already holding since pretty much the beginning and believed from the start, what would make him change? I doubt he is that long a holder or that much tokens if he talk like that but still.

Constructive criticism is very okay but like Christoph says it’s just very rude and negative comments. What Zac is doing by banning those sort of ppl is very great. Should also get blocked on other PundiX/FX twitteracc’s so they are fully gone. I will continue to annoy FUD ppl, spreading positive vibes around and would asking everyone with a Twitter acc here to do the same if you would like.

TLDR: too much FUD/scam messages. Convince them to change their behaviour otherwise annoy them. After all we are strong Pundians protecting our projects.

Btw welcome Christoph. You are not the only newer investor bc i bought in April my very first NPXS. Near ATH.

Happy that you joined the journey.