Some things to think about

Some ideas, some basic infos (for new comers & clarities) and some needed services… And random stuff pending. Maybe for another ama. @zaccheah @Peko

noticed Mew wallet; has made a watch only setup for cold wallet holders, this would be a cool feature for FX wallet! if you have cold Xcards in the safe or stashed about; if you have a watch only feature you’ll be able to keep track of all your holding in one place.

They changed quite a few things that made it easier to navigate.

The new version from the XChange video shows that clicking on your asset on the front page will redirect you automatically to the Assets / NFT page which is an upgrade. 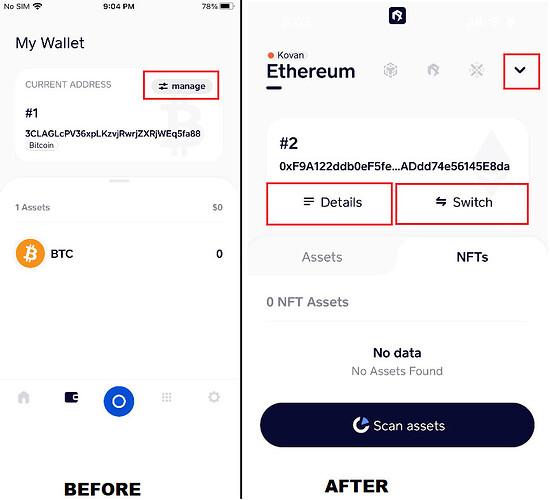 The UI seems pretty intuitive compared to before the DEX version. I think v4 will be a blast.

Me and my sister had no problem navigating too, compared to the previous version.

A lot of questions, Superbit. Welcome back

I’ll try to answer as much as I can.

Great idea. The Function X team will work on it. If the community can make a nice one, that’s even better. FXDM will award.

You mean XCard, I believe. For lightning network, we will support it via onchain sales and payments on XPOS first. Also, it helps us to estimate the demand of BTC lightning network. At this moment, no support yet. The focus on XCard is to launch the card supporting 4 different chains first and add more features later.

I’m not sure what kind of fees that you refer to? If you refer to the transaction fee, it will be the same as you are using BNB Smart Chain or Polygon via other blockchain wallet. Addresses on XCard operate the same as addresses on your wallet apps.

Yes it’s possible. FX Wallet team is working on a 2.0 ver. You will see a UI revamp on this version.

Still operating. The office now is located in the Ingenico Innovation Center to work closely with Ingenico Brazil.

Function X Foundation sets up its legal entity in Cyprus. As for Limestone, we didn’t hear from them yet. The large-scale real estate project takes years to build.

MissionWagmi NFT will be used for PURSE related activities. It is on the BNB smart chain. The team is planning for other use some day.

@Chloechloe see above and share with the FX Wallet team

This is something that PURSE team is doing, redeeming PURSE for giftcards, including points that can be used to purchase games. But I need to give you realistic expectation that Blizzard doesn’t do in-game crypto now. We asked. Maybe one day they will change…

Noted. More and more countries will ban using credit card to buy crypto. It is happening. This makes me think XPOS has a good opportunity here. However, on those 3rd party on-ramp services, user login is necessary on those platforms because they process the transactions and all users need to go through their KYC for AML compliance. We don’t share users’ data with 3rd party app developers, so that’s why users have to create their account there and require login in.

You are right. It’s not announced yet. Before COVID happened, we actually planned to announce it in a large event, but the event got cancelled and all things were disrupted. If we find a good opportunity to announce together with Sunmi’s overseas branch (such as Japan), we may be able to pick up the conversation with them again. I prefer not announcing the news by ourselves alone.

We had a joint event with Amcham to acquire merchants in Korea a few years ago. Now we don’t have activities with them because we’ve identified certain countries where they need to access crypto the most and decided to put more of our resources there.

Hope these answer your questions.

It’s good to be back, and thank you very much for your lenthy response. We really appreciate it and everything you do at PundiXLabs.

Holy smokes, this is really nice, I wasn’t aware you were able to make animations.

I would however say, the sound effect doesn’t go with fx logo, sounds a bit like Intel processor sound effect. Maybe we need something a bit more

explosive, but same instance pleasant to the ear.

Also to note, imo and generally saying it out loud to all content creators, it needs to be from a professional outlook, fit for any settings, stand well against time, because fx is a serious company.

I hope you submitted this in fxdm still Ivan, because I think it’s brilliant, but not exactly matching fx eco imo…