Time to be proactive!

With what is happening with LUNA … they have some proposal to change some parameters ( may be a long shot) but still they are not able to make changes because of 7 days voting period.

I think we need to be proactive ( know wood … hopefully something like this does not happen to fx). But we need to have a mechanism where we can pass a emergency proposal in few hours which might help recover faster if something happens.

Just starting this thread for ideas and what we can do.

I was on Terra’s forum reading, some said it is hardcoded though since it is using cosmos SDK. Can it even be changed?

Now is the best time to attract other protocols into FX ecosystem. All migrating and looking for next blockchain. Maybe team can ram up collab or partnership with those protocols exiting out. A lot of smart brains.

I’ll still stick with DAI and BUSD on my side for stable.
Anyway, wrt to your proposal, FxCore and PundiXChain are bases upon Cosmos SDK, but are not IBC’d to Cosmos.
Thus, the FX team can proceed to any emergency change they’d like, anytime they’d want, especially since the team owns the majority of tokens.
Currently, they’re delegated to many public validators, but that’s a team choice to proceed like this…
So, i’m confident we wouldn’t have the same kind of issue for now…

With so many protocols with smart devs exiting out of Terra, i hope the team can somehow attract them here to build on FXCore since it is also based on cosmos sdk which they are familiar with.

Once in a lifetime chance that we get to see so many devs looking for a job.

Well it looks like USDD is doing what i hope we would do. Incentivizing devs to come over since this is a once in a blue moon opportunity.

With their large funds, they will probably be able to snatch some devs over. 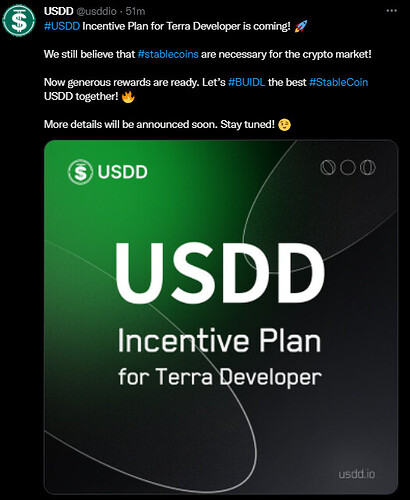 See what i mean? I posted during the panic to grab devs to our side, now few days later, every chain is trying to snatch.

We need to do something.

@BlueStitch Let’s do one more on the official account.