What are the tokens you want to see in DeXPOS?

We’re now at the stage of collecting feedback and information about the DeXPOS beta testing, and would like to ask for opinions from all of you (not just those who joined the testing)

Right now the DeXPOS on testnet supports Polygon, BSC and Ethereum. What are the tokens you’d like to see in the coming DeXPOS 1.0 official version? Leave a comment to let us know!

Maybe add tokens that have consistent trading volume on all CEX for the past 6-12 months.

By consistent trading volume, i mean those that are traded the most with high liquidity over a long period which means stable demand is there and people are more likely to have those tokens and will be able to pay with those tokens. 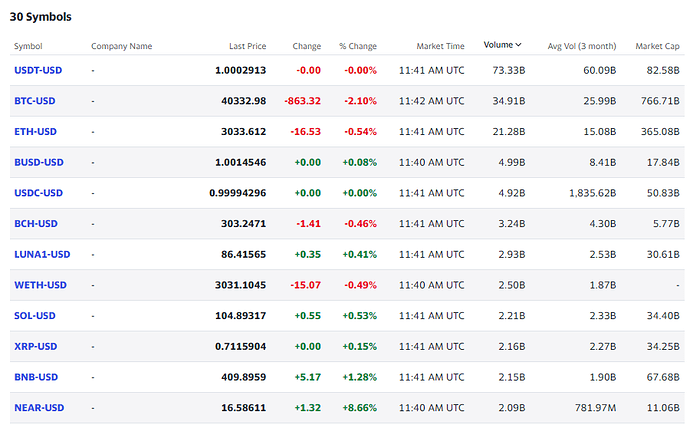 Summary - Add tokens that have these characteristics

With those combined, transactional activities will more than likely to be higher than the norm.

Judie, the basics : BTC, BNB, ETH, etc.
But more than anything, i’d love to see them using the PundiXChain so that we burn PundiX a bit more…

All tokens from eth, bsc and polygon

We forgotten to ask an important question, which is, are these initial token listing exempt of listing fees?

It would be great or a workability, if we can somehow generate the demand to have companies applying to list on the DeXPOS. Imagine a backlog of listing tokens, that would be a dream come true.

Maybe this idea is possible by starting off with what Scene pointed out, most volume and having Dubai/El Salvador and others hit the space simultaneously with activations.

A buzz needs to be generated imo (marketing etc. I think it is a perfect opportunity to flex the marketing usability and broadcast awarenesses) or even a mainstream commercial in El Salvador or Dubai, something along these lines is worth an attempt imo…

Another idea could follow to have all masters including Hakan, Sahil and all distributors to see if they have ideas to utilise this push collectively across the globe…

Also @zaccheah what was discussed few weeks back on twitter regarding Sahil, could be imitated in different cities…

In different languages too…

Local radio station interviews, youtubers etc could all play a small part in the bigger picture…

Big brand CEO’s using the system alongside team Pundi is another dream.

Another matter I’ve read, some who have had some disappointments is the lack of burning of Pundix tokens transacting over the DeXPOS.

If listing fees applied (which I assume it will eventually if not now) they can be used to buy back and burn… Maybe as a community, we can come up with ideas how else we can apply more burns, on other chains.

Just my opinion with regards to burning tokens when transactions happen between other chains on DEXPOS:

All POS devices and Online Payment Systems does charge a fee for accepting payments. On Shopify Payments and Stripe, it can be anywhere between 0.5% to 2.5% dependent in the volume.

DEXPOS could follow these standards but reduce the percentages to a minimum to allow cheap transactions and also implement a cap on fees to facilitate large transactions.

Lets say, someone transacts $1000 worth of PolygonX (made up the name), DEXPOS could charge 0.2% (capped at $10) and get $10. In crypto terms, lets say each PolygonX was worth $2, so DEXPOS would generate 5 PolygonX for the ecosystem. They could use a price oracle (I believe that’s what its called) to benchmark prices and fees.

The fees then could be divided between FX and PundiX. Or, maybe only FX so every transaction on PundiX chain burns PundiX while crosschain transactions would benefit FX solely.

Then, there could be a mechanism where PolygonX is automatically converted to a stablecoin (lets take USDT). Every week, accumulated USDT could be used to burn respective coins or use it for other purposes such as weekly lottery (this could generate hype in my opinion and market the wallet a bit more where 1 delegated fx would count as 1 entry).

Then top 10 coins in market.

I suggest keep the receive address open for top 10 first then top 50 then top 100 etc.

If someone want to pay to a merchant with crypto he or she can be holding any of the 3000 out there so it’s always better to keep door open to add any on prefer to merchant from beginning.

I would love to be able to work in DexPOS with (in descending order):
HNT, ATOM, PRE, ETN