How to claim the entire amount of rewards from staking?

First you have to “unlock” the rewards claiming that first 5%, then after 19 weeks you’ll can claim the other part of your rewards. Week by week 5% will be unlocked but this time you can wait until the end of the last 95%.

I’m in the same situation as you, this claim cost me (Ethereum Network fees) more than the reward itself, but at the end, after claiming both rewards, now 5% and 19 weeks later 95%, rewards will be higher than both claiming fees.

So I have keep all my pundix to get about 100 dollar full reward after a nearly a year wtf , it has been till June 15th not another 19 something weeks

No no, now you have to claim your first reward (5%) and redeem your PUNDIX, they don’t have to be stake for this 19 weeks. 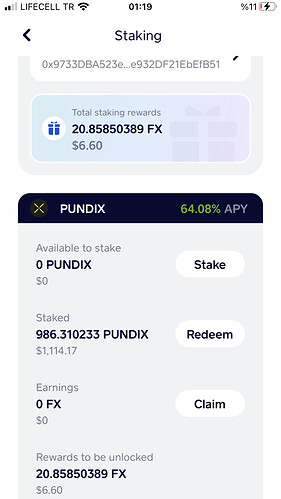 what should i do now?

Ethereum Network fees for claiming rewards are more or less $20-25.

I don’t going to tell you what to do, but my opinion is that this amount is not enough for to be claimed. You can use the money used to pay fees buying even more FX from a CEX.

You know, that’s your choice not mine.

do i need to redeem pundi x

I thought there was an award distribution until December, now I understand, thank you