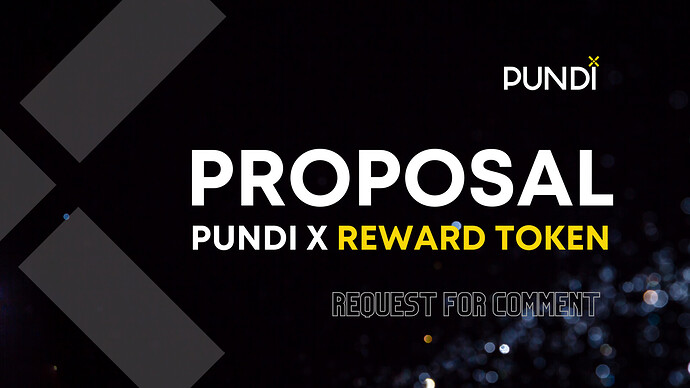 This is a Request for Comment article for a Reward Token for $PUNDIX and $NPXSXEM. For further ongoing discussion, go to Proposal for a Pundi X Reward Token.

We would like to give $PUNDIX holders an opportunity to claim various rewards via ownership of a reward token. This reward token will give users the opportunity to receive #NFTs from our partners, airdrops of various forms — including physical gifts such as XPOS and merchandise. It will also be used to incentivize XPOS usage. Another reason for a reward token is to give NPXSXEM a place to merge into the Pundi X ecosystem.

$PUNDIX token holders will initially be able to claim PR tokens, followed by the ability to delegate and stake in every new block created in Pundi X Chain. The PR token is not meant for trading and speculation and will have a deflationary mechanism designed in place.

Mission: To supercharge $PUNDIX and expand the Pundi X Ecosystem

The purpose of $PR Token is to reward users, incentivize XPOS usage and its network, expand Pundi X Chain’s ecosystem and fuel $PUNDIX to the next level. $PR token is secondary and meant for claiming reward while $PUNDIX is the primary token in the network that will be used to participate in DAO governance. 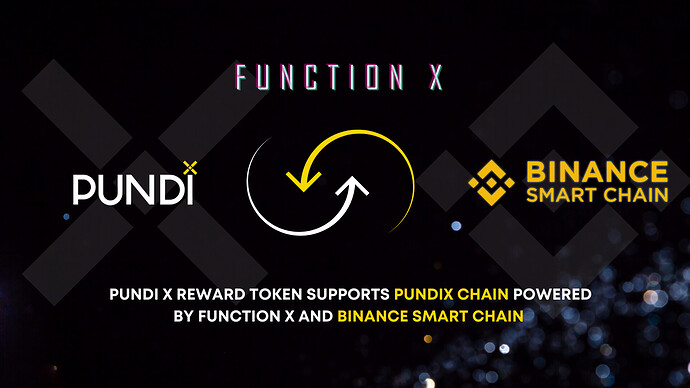 The $PR token will be multi chain with initial support for Pundi X Chain and the Binance Smart Chain. This means that various rewards will be claimable in both of these ecosystems while maintaining the number of tokens simultaneously, which means no extra dilution even though tokens are on both chains. 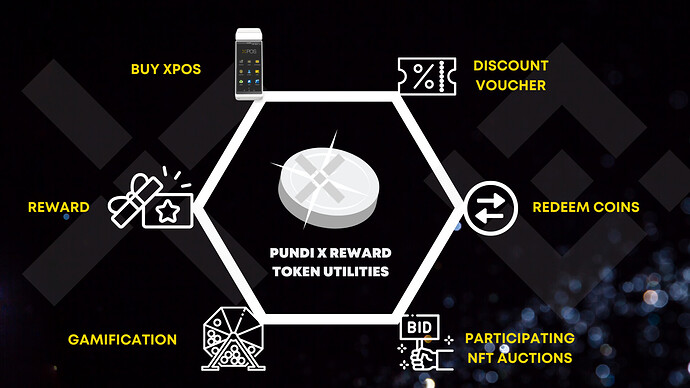 These are the proposed utilities that might be implemented.

Pundi X users will earn $PR as a reward for participating in validating blocks in the Pundi X Chain, supplying liquidity, being an XPOS merchant or spending in XPOS. The reward will be determined based on $PUNDIX on-chain protocol proposals.

The $PR Lottery /lucky draw will be a decentralized game where tickets can be purchased with $PR. There will be pool cycles where these lotteries will be determined solely on-chain and redeemed on-chain.

$PR could become a discount voucher for the base asset in accordance with market rates (if liquidity is sufficient) to pay network fees at a discounted rate.

$PR will be one of the exclusive digital assets to purchase or redeem PUNDI X Collection NFTs.

$PR can be used to redeem or participate in the initial launching of tokens on PUNDI X chain.

$PR tokens can be used to purchase XPOS at discounted rates.

There will be no pre-mining allocation to the team, founders, advisors or any other party. The only initial distribution is either through an airdrop to those already holding $PUNDIX or through migration by $NPXSXEM.

There is a 90-day migration window. The migration ratio is 1:1. Users have to send their $NPXSXEM to a designated smart contract to convert to $PR tokens. There is a 12-month lockup period for the initial distribution of the $PR token. $NPXSXEM migration users will get 12% of the total claimable tokens right after the migration, and the remaining 88% will be unlocked (8% every 30 days) over the next 11 months.

It is worth mentioning that $NPXSXEM shall be migrating from BEP2 to $PR which is the BEP20 version. $NPXSXEM migration users will need to prepare some $BNB for the gas fee to perform the migration and the following unlocked $PR will be automatically airdropped to the wallet that is submitted and verified by the users during the migration. Further details of migration will be provided in a separate article.

Details of distribution of $PR to $PUNDIX holders

The total of 19,237,401,613.17 $PR tokens is designed to be distributed to all eligible $PUNDIX holders and it can be divided into two parts. All distribution will go to BEP20 wallets even though it is claimed by users in Ethereum. The reason is because the private key and public address generation in BSC is similar to Ethereum hence if you own the seed and/or private keys to your Ethereum wallet, the same private keys can be used on BSC.

Part 2: Subsequent distribution of 8% for 11 times.

There is a unique design philosophy for $PR.

The initial idea of a $PR token is to act like a loyalty point, allowing users to redeem the tokens for stuff (such as NFT tokens, XPOS, etc.), community incentives, as the receipt of participating events (such as IEO, IDO) The $PR token is NOT for speculation. 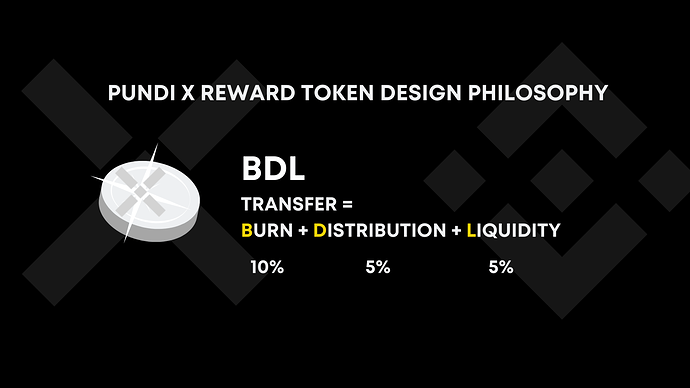 To counter the inflation rate and prevent speculation, we have introduced a Burn, Distribution and Liquidity mode (’BDL’). For each transaction, 20% of the tokens will be burned, distributed and transferred to the liquidity pool. This means users will be wary of moving tokens or trading them. The only time they will move tokens is to claim rewards. When they sell or transfer tokens to another non-whitelisted address they will lose 20% of value. The BDL rate is proposed to be set at 20% initially. There are several whitelisted addresses that are not subject to the 20% deduction. When the $PR token is sent to one of these whitelisted addresses, those addresses will be entitled to claim rewards.

Of the 20% BDL rate that is deducted, 10% will be burned, 5% will be distributed among all holders proportionally, and 5% will be put into the liquidity pool.

It is worth noting that the BDL rate can be reviewed and adjusted periodically through DAO voting of $PUNDIX. The setting of BDL will not affect the buying of $PR tokens from DEXes or for providing liquidity to the designated pool.

This Request-for-Comment is intended for discussion and debate which is happening on the forum: Proposal for a Pundi X Reward Token. A final results will be published whether to proceed with the Reward Token on official Pundi X channels.

We look forward to your feedback.

Thank you so much for this information. There are a lot of interesting parts, but I think people who had staked $PUNDIX will find useful to quote this specific part of your post:

We encourage $PUNDIX tokens held in the current staking pool (that launched on 6th Apr 2021 on the f(X) Wallet) to redeem and claim from staking pool between 16th — 21st June. That way users will fully enjoy rewards from the staking pool and not miss out on the $PR claim which starts on 21st June.

Redeem our $PUNDIX staked and claim our first 5% of $FX that’s the key.

In short people Redeem your PundiX from staking or hodl your PUNDIX on your Private FX wallets after the 16th of june and before the 21st of june, and you will be eligible for PR, when delegating comes on Pundi X chain on fx network by delegating your PUNDIX you will continue to earn PR for as long as your PUNDIX is delegated.

WHEN WILL AIRDROP IS OPEN FOR US?

THIS IS YOUR EXPLAIN;

PUNDIX token holders will be able to claim first airdrops if they keep their tokens in a wallet from 21st June. Subsequent airdrops will also be claimable if they continue to keep their tokens. We will use a 30-day holding period from 21st June onwards. This means that if you have tokens in your decentralized wallet during that time you will be entitled to the airdrop. If your tokens are in a centralized exchange, we strongly suggest you move those $PUNDIX tokens to your own wallet since we do not have plans to actively support these exchanges. Please carefully review “Details of distribution of $PR to $PUNDIX holders”.

It clearly says that PR will be airdropped once PundiXChain is live and running. If you plan to invest, please put in the effort of reading all their articles to keep yourself well-informed.

Thanks for reply but problem is that find the articles… Believe me I search and couldn’t find any news about that. Could you send me?

Sure, here you go. 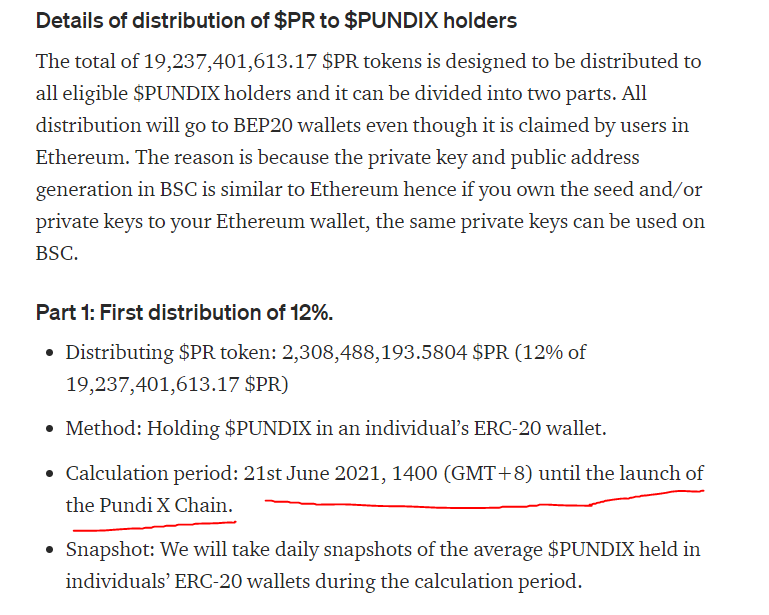 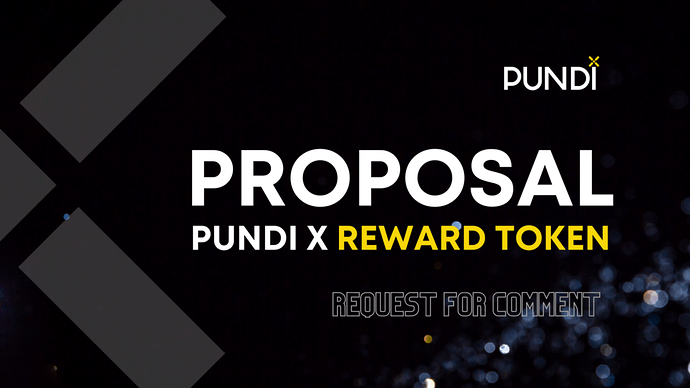 This is a Request for Comment article for a Reward Token for $PUNDIX and $NPXSXEM. For further ongoing discussion, go to Proposal for a…

Do you know when Project PR will start and will allocation for NPXSXEM increase?

I converted my npxsxem to purse end of the 2021. First %12 gave us instant; rest of it has been distributed each month %8. First distribution of November is missing for me. I opened ticket 28781; but no one answered yet. Missing purse is almost 2.178.378,00. Can you help me.
I gave the My metamask wallet address on ticket. If you want I can share it