Hello,
I am little bit confused regarding claim earnings. When i tried to claim my earnings from pundix staking, it says insufficient eth gas… 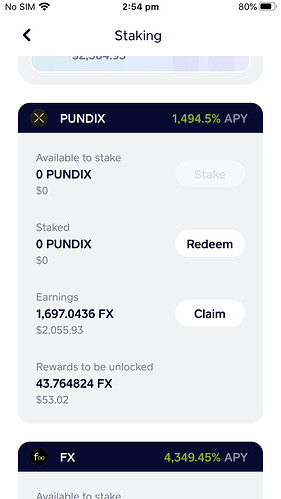 Also, last week it did not unlock my staking reward in this pic.

But when i tried to claim my earnings from fx staking, it allows me to claim. From this pic 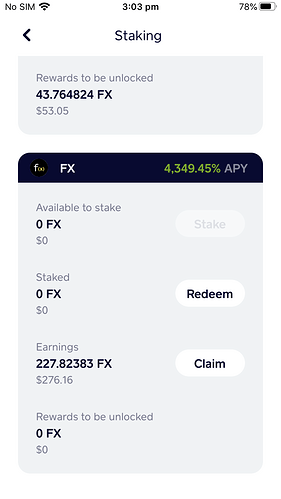 How come it allows me to claim Earnings from fx staking but not from pundix staking.

Note:
Have $300 worth of eth
Already did first claim on time.

could be just a dodgy network connection / interruption, do a reboot and use wifi, some times when it’s rejected me I’ve just hit it to go again and it’s worked the second time

I tried but still the same. thanks.

gas fees at this moment are around 100$

Is cheaper between 04 and 09 gmt and weekends

I’m experiencing the same thing. Rewards from staking FX is around 4-5x cheaper to claim than rewards from PUNDIX staking (yes, I have done 1st claim for both). Is there any particular reason for this?

I’m having the exact same issue. I reset, deleted my wallet, reinstalled it and recovered it and it still gives me the same error.

Me to… it always says (insufficient eth to cover the gas fee and I Have almost 250 dollar I’m eth, any suggestion, I don’t what to lose that reward.

Also rebooted, disabled WiFi etc. Nothing does the job…
Hoping we can claim before dec 5th.

Same here, even at 70 gwei I wasn’t able to claim. Not from pundix staking, nor from Fx staking. There are only 3 weeks left to claim and I fear my rewards will be lost.

Same here, but just received an answer with a transaction sheet as an attachment. I saw a ETH price of 644 dollar for the smart contract claim, and they say after that it could be that less ETH will be charged in the end…so very very expensive gas prices. Hopefully it will be low before december 5th. 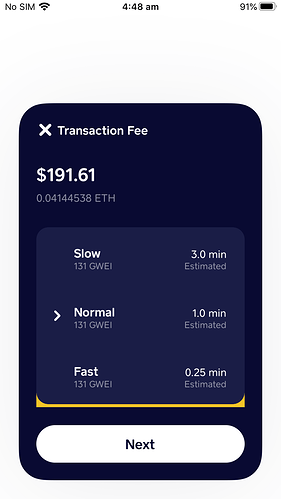 Guys, the transactions are not the same complexity in one case and in the other one. That’s the reason, I think, why prices are so different.
However, you should be able to claim your PUNDIX staking reward in FX pretty straightforward, especially since ETH fees are quite low at the moment. Anyway, if the gas price is set higher than necessary, the difference should not be consumed.
It worked pretty nicely for me (2 or 3 weeks ago) ; so, I don’t really understand why it’s not for you. Did you try to update your app ?

Indeed. It simply doesn’t work. Last 3 weeks I tried hour after hour. Never enough ether. I updated the app. I resetted my wallet twice. I tried with WiFi on / off - only on 4g. So I already asked the developers if there is a problem in the app or on some ether accounts maybe. Still no answer on that…

@indra
This issue seems legitimate.
Could someone from the team escalate the issue or at least answer those people ?

Our team is still checking on this. But as a note, the team has no control of the gas fee.
And you need to have enough amount of ETH to process to the next page (confirmation page).

We understand. Did you saw this thread?

550 USD worth of ETH wont cover my fees Bugs & Issues

There seems to be some kind of bug with claiming (app bug). Usually app should estimate gas limit based on network congestion, but for some people it just stays the same all the time and it is unreasonably high, over 1M. I looked through “Get Reward” transactions on etherscan and found some outliers that are 3-4 times higher than every other transaction, here’s some examples - https://etherscan.io/tx/0x074a59e4853ee303931787d317884c398f628dda3ea4b7bd2cafa71d9c906674 https://etherscan.io/tx/0x1…

Someone looked into this problem…

@indra ,
Please have a look. It seems like something is wrong currently, and preventing everyone from claiming their staking rewards, whatever the gas fee is… It’s never enough.

thank you @Padje for quoting my previous post. @indra please look into it guys, its pretty inconvenient and the deadline is really, really close.